A little history: Four trips to Temecula, only one without mechanical difficulties. I had to run half of lap after lacerating a tire. I had to borrow a wheel from the Holley's after bending a rim pre-race. The last time, our championship race, I had another bent rim! Now, I'm not sure if this happened on Bear Claw-Poppy, the pre-ride or the week before riding the norm at the mouth of the canyon. I know you're thinking, pump up your tires. I do have a pump, which I use before each ride. But I'm really starting to wonder if I need to start compromising traction for pressure. In my defense, for my weight, 30 psi 'should' be fine, but two rims in less than a year! Fortunately, this bend held and the race went off without too many problems. I'd say 'fine' but anyone that has done this type of race knows that would be a lie.

The last couple of years I've been converting the SuperFly into a SingleFly after the season. This year took a few extra weeks but I made it. Why, I don't know. I'm still trying to figure this one out.

This is what I found in my tire after a season of stand by.

The creature is about the size of a tennis ball. I don't know how it fit in the tire. I brought the thing into a stable ecosystem to see if I can get it to continue to grow (my closet has to be better that a dormant wheel). If I've truly created a monster I'll let you know.
Posted by Carson at 6:51 PM No comments:

Just got back from the California. Karl and I went down for the last race in the 12 Hours of Temecula series. We couldn't have had better race conditions, except for the drive down: average speed 60 mph at ~6 miles per gallon. Pulling a trailer in the wind is a trip...

The race organizer does an amazing job with the race and sponsors. Not to mention a pretty sweet post race raffle (bikes, lights, wheels, etc). Needless to say in four attempts I've yet to win anything in said raffle. Throughout the race along the more challenging sections the organizers hand out tickets for cash based on individual performance. I got $5 bucks for cleaning a rocky section. I'm going to count this as winning something. 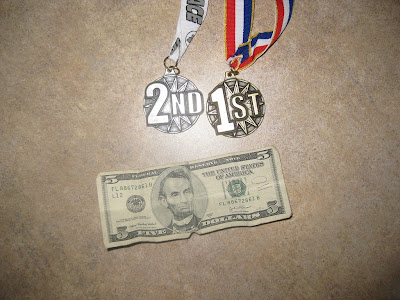 Thanks Karl the quality time in the truck and racing with me. Thank you Jamie for dealing with life while I'm gone for days at time riding my bike.
Posted by Carson at 8:29 AM 1 comment: