I had to take advantage of the Friday weather, warm and sunny isn't something that we've had much of lately. I decided against the road bike (wonder why?) and headed for the ESBST. There isn't any snow on the East bench, so I figured the trail would be dry because of the sand and gravel. I was wrong. North of Slate Canyon there was about three inches of slush. I made it to the Y parking lot and turned around. Not defeated I went South toward Springville. No snow, the ground was firmer but plenty of large puddles. Brennen likes to jump in puddles. I try to jump over them, only I can't bunny hop that far, splash! I went up the hidden trial.

The only snow was on the trail! What's the hidden trial? It's just that, but it's a fun section of single track in the middle of nowhere. So where is it? Here's a hint..

The first ICUP race is next weekend. It's going to be interesting.
Posted by Carson at 8:12 AM 2 comments:

Last Sunday was almost back to normal: going for a ride and hanging with Brennen. I road the Extreme South BST, as KC calls it. Most of the slush is gone and it's dry for the most part. South of Rock Canyon the snow came back along with some nasty muck. I wanted to go for at least two hours, I know big whoop, but that's longer than the upcoming race. I figure if I can ride for a couple of hours without collapsing I should be able to race for 90 minutes. Well, race the first lap then struggle for the next two. I took all of the out and backs along the trial and even made one up. Someone started a new section of trial but I lost it quickly and ended up free riding down to the BST double track. 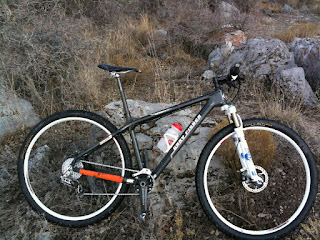 When I made it home Bren and I went for a walk. It's nice having the river trail behind the house. We spent longer than the ride throwing rocks and playing with sticks. Even practiced subtraction. If you have three sticks (swords) and I take away one how many do you have left? He got tired of this and opted for a sword fight instead. If you look close he is in this picture.

When I finally caught up to him, he said "hurry dad...". Maybe I should remember those words and use them as a motto.
Posted by Carson at 5:20 PM No comments:

The first ICUP race is fast approaching and I'm a little nervous. I'm finally feeling better after hurting my back (again) and catching something nasty from the boy. Kids are great! No, really. Except the whole getting sick thing. Jamie and I rarely got sick until Brennen came along. Now everything he gets we get as well, only twice as bad! Back to that racing thing. Earlier I had thoughts of Sea Otter, nope. Karl and I missed the first race of the Temecula series. Now I'm starting to feel a little 'ify' about this one. I shouldn't care, just show up for the race and get some extra riding in during the weekend. Maybe head a little farther south and lose some money with Jamie. I'm still on the trainer but it's not riding. Not to mention boring as can be. I have caught up on all of the Dexter episodes I've missed over the last year. That's a plus. I've made a few attempts at the BST, what snow is left is difficult to ride and preventing the ground from drying. A teammate mentioned Rock Canyon, that was fun where the snow was frozen once I made to where the sun reaches the canyon floor I was stopped and had to turn back. I ended up doing hills on the road on my mountain bike with about 10 psi in the tires. Good times! I miss the Timp foot hills, Diamon Fork and Mt. Loafer. Can't wait for spring...
Posted by Carson at 12:15 PM 3 comments: